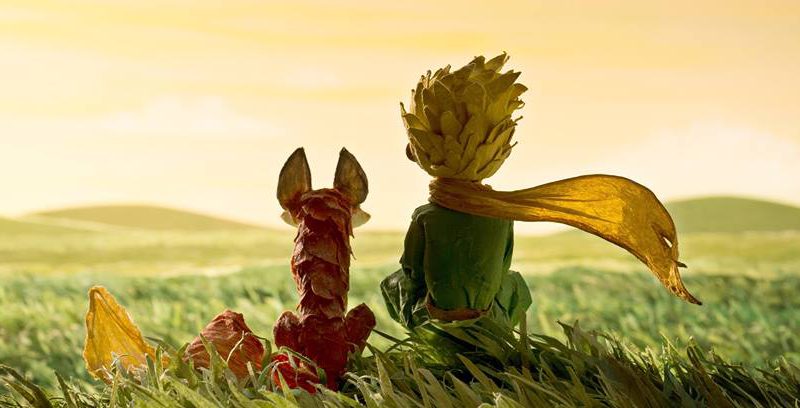 Essential, this is the word of order and also conflict in this beautiful tribute to the story that touched generations. Based on Antoine de Saint-Exupéry’s most famous work, the animated film rescues all the emotion from the original film enhanced by the melodramatic resources orchestrated brilliantly by director Mark Osborne.

In the story, a pleasant child lives under her mom’s strict chores list without any room for fun or friendships. In order to ensure a vacancy at the prestigious Werth School, they move to the institution’s surroundings and, in the neighborhood, the girl will get in touch with the little prince’s universe, shown to her by the captivating aviator.

Full shots of the urban space under aerial perspective portray the city in an almost mathematical way, standardized; thus highlighting the problem of a society increasingly focused on producing and comply with what is understood as essential, a conduct that we also see in the pressure exerted by educational institutions.

“Growing up is not the problem. Forgetting is.” quotes like this exemplify the problem grown-ups face in comprehending this fantastic world, full with Exupéry’s considerations about life. By highlighting passages of the classic in stop motion, the movie also provides an aesthetic differential of the sequences on the present, in which the characters and environments have a design close to what is developed by Pixar Studios.

However, regarding the narrative strategy, there is a greater resemblance to Disney’s productions, especially those with strong emotional appeal. “One runs the risk of crying a bit if one allows oneself to be tamed”, literature excerpts are reminded and exploited under the melodrama perspective.

The scenes are constructed using artifices common to the genre, entitled to a calculated soundtrack and moralizing pedagogy, however, the reiterations are cared for and even poetic, the script is conducted in the most articulated possible manner. Which is visible in the relationship between the girl and the pilot who embodies the archetype of the ideal grandfather, or even in the transformations of the interaction with the mother.

At times, like in the journey through space, some excerpts of the book seem to disconnect from the main arc of the current proposal, but this is soon solved and justified further ahead. For those who know the book or even the cartoon made for TV in the late 1970s, the rose, the object of adoration, appears in this production and offers several reflections.

“To me, you shall be unique in all the world. To you, I shall be unique in all the world”, another aspect worth mentioning is the link built between the prince and the fox and how it was incorporated in the main characters’ relationships in this new adventure. Essential is to run to the movies and watch this beautiful tribute to the illustrious resident of the asteroid B612.